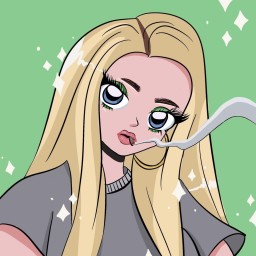 Belle first made her internet debut on Instagram, making it big fast with her sexy Egirl makeup and Kawaii clothes. She grew up in South Africa and now lives in England. Her interests include internet culture, anime and kawaii fashion.

Belle took a year long break in-between, she claims it's because she thought her career was over after Instagram deplatformed her.

Now on OnlyFans she can share all the sexy photos and videos she wants without having to appease Instagram’s conservative rules. Belle says she feels much more comfortable on OnlyFans for that very reason, and all of her fans couldn’t be happier with that decision.

Up to this point many of her fans knew her for her style and interest but didn’t get to see much of her on a deeper level. Belle has marketed herself through multiple pretend scandals including the very infamous one where she made the internet think she was arrested for bashing a girls car after someone stole her hamster.

Belle even leaked a fake mug shot, that even I thought was real until watching the ColdOnes podcast. Because of some of her online shenanigans no one really knew anything about the real her. This is why Belle decided to star in these podcasts.

Many of us had only heard her voice in clips before this because she says she has always been insecure about her voice. Luckily for us, she is trying to overcome this. Her bubbly and fun personality is shown through the podcast.

Now that you’re updated let’s review what we learned about Belle through these podcasts. The first one she aired on was ColdOnes by Max and Chad also known as Maxmoefoe and Anything4views. Max and Chad are well known for their videos with iDubbbz, HowToBasic and FilthyFrank (now known as Joji). During ColdOnes the hosts and their guest drink, Belles choice was Smirnoff Vodka right out of the bottle.

One of the more interesting highlights of the show is when Belle says she will do anything in a sex tape for 10 or 20 million. That immediately piqued everyone's interest. She says she is right on the cusp, because she has never shown real nudity but is willing to. Belle has also famously sold bath water, so they talk about her process of curating it.

She said she would run a bath, listen to a podcast, and fill around 100 bottles per bath (sounds like a nice job to me). Belle took around seven baths in total. Many people said she probably just filled it with tap water, but she says that is false because she likes “to indulge in the insanity of what i’m doing”, which I think is one of the many reasons people like her so much.

Next she starred on the H3H3 podcast by internet comedy duo Ethan and Hila Klien. They are known for their YouTube commentary videos brand Teddy Fresh. Hila hilariously wore cat ears and paws to pay tribute to Belle because she wears “kitty girl” costumes. Belle dresses as a “kitty/neko girl” because of her love of anime, she says she always thought they were so cute and wishes it was more socially acceptable to wear in public.

Ethan asks what got her into the sex industry and she says one really bad night of babysitting did it for her. She was hired to babysit for a few hours and then the parent was 16 hours late. Belle said she stayed awake the entire time because she kept waiting for the parent to come back.

While that must have been a horrible night, it really did change her life forever. Another topic of interest often brought up with Belle is the ahegao face. She shares with H3H3 that the face is “actually quite hard to do.”

She actually prefers gangbangs. I don’t think anyone expected that answer but Ethan sure loved it. The last topic we will go over is her daddy dom kink. Belle explains that many women like it because it doesn't necessarily have to do with a dad, it just gives their partner dominance. She says she likes the kink because of the nurturing aspects of it

What’s Not To Love?

Overall I think it was a great choice for Belle to do the podcasts, it really showed her fun and bright personality. She was already a fan of both of the shows so the chemistry between her and all the hosts were on point.